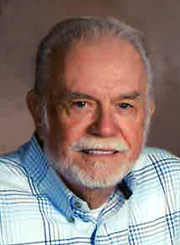 RONALD BOND
Ronald Bond, age 77, sadly passed away on September 01, 2020 in Columbia, TN. He was born in Christian County, KY on October 31, 1942, to the late parents Gobel and Pauline (Combs) Bond.
Ron was very involved in his community; he never met a stranger. He was a faithful member of Thousand Hills Cowboy Church in Ethridge, TN. He was a member of Gideons International. Ron devoted himself to spreading the word of God by teaching at First Assembly of God in Lawrenceburg and Voice of Victory Temple in Ethridge. Throughout his years, Ron served as President of the Lawrenceburg Rotary Club and was awarded multiple Paul Harris Fellow recognitions. Ron accomplished a lot in his life, but his biggest accomplishment was starting his beautiful family with his loving wife, Pat, of 42 years.
Ron worked as a plant manager for a steel industry for several years.
Ron Is preceded in death by his parents and his daughter, Cindy Gibson.
Ron is survived by his loving wife: Patricia Bond (Palmer); children: Ronnie Gibson, Ken (Stephanie) Bond, Doug (Gina) Gibson, Rhonda Bond, Stephanie (Corey) Harper, James (Becky) Bond; sister: Shirley Kirkland; grandchildren: Ashley, Candy, Shannon, Jeremy, Kaila, Elizabeth, Colton, Camron, Courtney, Tyler, Alexa; and 14 great-grandchildren and several nieces and nephews.
Ron will be missed dearly by all the lives he touched.
Williams Funeral Home & Crematory is assisting the family with arrangements. You may send the family your sympathy or share your memories at williamsfh.com.