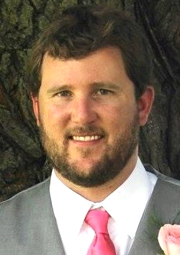 Kurt Dinkens
Kurt Dinkens, age 32, of Franklin, KY, passed away Monday, October 12, 2020 at 1:28 p.m. at The University of Louisville Hospital in Louisville, KY.
Kurt was born on November 3, 1987 in Nashville, TN to parents Rick and Brenda Lawson Dinkens of Franklin, KY. He was a 2006 graduate of Franklin-Simpson High School in Franklin, KY.
After high school, he enjoyed coaching varsity football for the Wildcats. He and his family attend Sulphur Spring Baptist Church in Simpson, County. He worked at Logan Aluminum in Russellville, KY and enjoyed spending all his time with his wife, Kati, and beautiful baby girl, Emmy Kate. Kurt enjoyed spending time in the woods with his brother and nephews deer hunting, or whatever came in front of them that needed to be shot. He was a huge UK fan. Kurt was a wonderful man, a great husband and super, great father. Kurt, you will be greatly missed by many!
He was preceded in death by his paternal grandparents: Earl and Claudine Dinkens; and maternal grandparents: Cordell and Patty Lawson.
In addition to his parents, he is also survived by his beautiful wife of three years: Kati Wilburn Dinkens of Franklin, KY; two children: Emersyn Dinkens and Greyson Dinkens; brother: Keith Dinkens (Karie) of Franklin, KY; step-father-in-law and mother-in-law: Michael and Lori Berish of Pulaski, TN; nieces and nephews: Garrett Dinkens, Kenlee Dinkens, Braxton Dinkens and Addison Dinkens; several aunts, uncles and cousins.
Funeral services for Kurt Dinkens will be held at First Baptist Church, 303 East Cedar Street, Franklin, KY at 1:00 p.m. on Saturday, October 17, 2020 at Gilbert Funeral Home of Franklin, KY. Burial will follow at Greenlawn Cemetery in Franklin, KY. In lieu of flowers, expressions of sympathy may be made to the Dinken’s Family Children’s Educational Fund via: Gilbert Funeral Home, 325 West Cedar Street, Franklin, KY. 42134. Online condolences may be made at: www.gilbertfhonline.com.