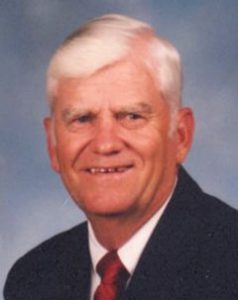 Billy Ray Rudd
Billy Ray Rudd, age 87, died on Sunday, November 1, 2020 in Marshall Medical Center, Lewisburg, TN.
He was born in Giles County, TN on October 26, 1933. He was a member of Bradshaw Baptist Church and previous chairman of Bradshaw Cemetery Fund, graduated from Beech Hill High School in 1951, served in the US Army from 1954 to 1956 in Zama, Japan as a Sergeant, and married Ernestine Prosser in 1956. In 1956, he worked at Florence Stove in Lewisburg, TN and in 1957 he moved to Lawrenceburg and went to work at Murray Ohio. He retired in 1988 from Murray Ohio as assistant vice president over industrial engineering. He was Chairman of American Cancer Crusade in 1964, 1964-1965, fourth elected Exalted Ruler of Lawrenceburg Elks Club, a member of the Elks and Kiwanis Clubs, Served on the board of directors and president in 1965 of Murray Ohio Savings Association, received the National Award for serving on selective service system for 20 years and was Citizen of the week in Pulaski, TN in February, 2006.
He was preceded in death by his parents: Herman Tillman and Mable Gertrude Holley Rudd; and his wife: Ernestine Rudd.
Survivors include his son: Ray Rudd (Terry), Old Hickory, TN; daughter: Kathy Tipper (Mickey), Lawrenceburg, TN; grandchildren: Lucas Rudd, Sydney Rudd, Chad Tipper (Jenna) and Brad Tipper; great-grandchildren: Scarlett Hartsfield and Sully Tipper.
Graveside services for Billy Ray Rudd were held on Saturday, November 7, 2020 at 2:00 p.m. at Maplewood Cemetery. Carr & Erwin Funeral Home was in charge of all arrangements. Memorials may be made to: Bradshaw Cemetery Fund, C/O Don Creecy, 890 Powell Chapel Road, Pulaski, TN, 38478.