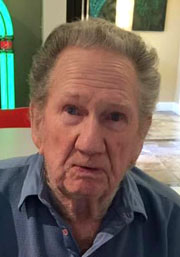 Charles W. Hayes
Charles W. Hayes, age 86, passed away on November 7, 2020 at ECM Hospital in Florence, AL.
Charles was born on August 26, 1934, in Lawrenceburg, TN to his late parents: Clarence and Minnie Bell Williams Hayes. After retiring from General Motors in Detroit, Michigan, Charles returned to his home in Lawrence County, TN. He enjoyed his retirement years in Tennessee with family and friends. He loved watching sports, especially Braves baseball and horse racing. He served our country in the Army and Army Reserve.
In addition to his parents, he was preceded in death by his brothers: Barney Hayes, Otis Hayes, Tom Hayes; and sister: Pauline Newton.
He is survived by his brother: Howard Hayes; several nieces and nephews; and special friend: Marie Miller.
Williams Funeral Home & Crematory is assisting the family with arrangements. Condolences may be shared by way of: williamsfh.com.