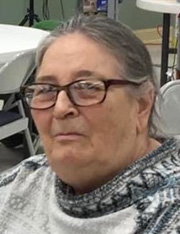 Carol Sue Smith
Carol Sue Smith, age 73, of Lawrenceburg, TN passed away Friday, November 27, 2020 at Maury Regional Medical Center in Columbia, TN.
She was a native of Toledo, OH, a homemaker, and a member of Henryville House of Prayer.
She was preceded in death by her parents: Dwight and Elinore Cox Rhodes; and one brother: Howard Rhodes.
She is survived by her husband: Gordon Smith of Lawrenceburg, TN; one daughter: Angie Long (Scotty) of Lawrenceburg, TN; three sons: Micah Smith and Kenny Smith (Shelia), both of Lawrenceburg, TN, and Kyle Smith (Rachel) of Pinson, TN; ten grandchildren; six great-grandchildren; and two brothers: Eddie Rhodes of Burlington, IA and David Rhodes of Monroe, MI.
A memorial service for Carol Sue Smith will be held at a later date. Neal Funeral Home is assisting the family with arrangements. Condolences may be sent by way of our website at www.nealfuneralhome.net.