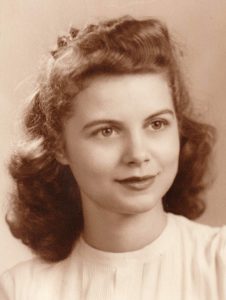 Ethel Young Benson
Mrs. Ethel Young Benson, 95, of Ethridge, TN passed away at her home on December 2, 2020.
Mrs. Benson was married to the late Coach Ralph Benson who was from Bradford, PA. She was born on May 16, 1925 to the late Robert Millard and Mildred Nell Kitchen Benson. Having spent her childhood in Ethridge and attending Lawrence County High School, Mrs. Benson went on to Martin Methodist College in Pulaski, TN. She then completed her formal education at American University in Washington D.C.
She began her teaching career at Haylong High School in Mt. Pleasant, TN. From there she went on to teach at Summertown High School and Summertown Elementary. She spent the last years of her career teaching at Ingram Sowell Elementary School in Lawrenceburg, TN. Generations of students admired and appreciated Mrs. Benson. She always remembered her former students, and upon seeing them years later, enjoyed talking about the times they shared together in the classroom. In recent years the Lawrence County School Board named an award in her honor. The Ethel Young Benson Award is given to a retired teacher who exemplified excellence during his or her career.
She was a member of Ethridge United Methodist Church where she led Sunday School classes for many years. The Study Club, FCA, The Red Hat Club, and The Retired Teachers Association were all organizations to which Mrs. Benson belonged. She was very much a historian. Keeping church, community, and family histories was a passion. Painting, reading, and cooking were all hobbies she enjoyed throughout her lifetime. She also delighted in spending time with her grandchildren and great-nieces and nephews.
She is survived by two sons: Rick Benson (Connie) of Ethridge, TN and John Benson (Judy) of Lawrenceburg, TN; four grandchildren: Anna Benson Hamilton (Daniel) of Franklin, TN, John Brock Benson (Rachel) of Murfreesboro, TN, Lucy Young Benson of Nashville, TN and Lindsey Benson Cox (Tyler) of Pulaski, TN; along with three great-grandchildren.
A graveside service and burial for Mrs. Ethel Young Benson were held at 1:00 p.m. on Saturday, December 5, 2020. Pettus-Turnbo Funeral Home was in charge of all arrangements. Memorial donations, in lieu of flowers, may be made to Ethridge United Methodist Church, P.O. Box 102 Ethridge, TN 38456 or the Baker Cemetery Fund, 50 Benson Rd, Ethridge, TN 38456. Condolences may be sent by way of: www.pettusturnbo.com.