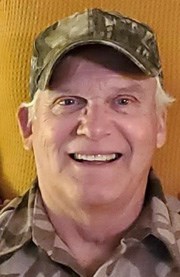 Joel Douglas Flippo
Joel Douglas Flippo, age 67, of Summertown, TN went to his Heavenly home on Wednesday, December 2, 2020.
God was his first love and if there ever was an example of a true Christian, Papa Joey was it.  He always kept a picture of his beautiful wife of 47 years in his billfold, whom he loved more than life itself. He took pride and joy in his kids and grandkids.  He was always at every event and activity to cheer them on. He was an avid deer hunter and fisherman who loved to share his love for it with his grandchildren. Joey never met a stranger and was so full of love. Anytime you saw him he always had a smile to share. His favorite saying was, “You show love and you’ll get love back!” After he retired as a chemical operator, he enjoyed his retirement life, working with his cattle and enjoying his morning coffee with his beloved wife. He was a member of Summertown Church of Christ where he served as a deacon.
He was preceded in death by his parents: William Paul and Ethel Christine Clifton Flippo; two brothers: Tommy Flippo and Jimmy Flippo; father-in-law: Arnold Davenport; and sister-in-law: Donna Jo Mitchell.
He is survived by his wife: Shellia Flippo of Summertown, TN; two daughters: Angela Davenport (Richard) of Summertown, TN and Gina Bryant (Tanner) of Lawrenceburg, TN; one son: Nathan Flippo (Brittney) of Summertown, TN; eleven grandchildren: Tara Nichols (Jonathan), Katelynn Massey, Sam Massey, John Thomas Davenport, Lizzie Davenport, Tyson Bryant, Mason Bryant, Chloe Perkins, Bralen Perkins, Jake Flippo, and Barrett Flippo; one sister: Linda Morrison (Bill) of Waynesboro, TN; mother-in-law: Jeanie Davenport of Summertown, TN; and two brothers-in-law: Tim Davenport and James Mitchell both of Summertown, TN.
Funeral services for Joel Douglas Flippo were conducted at Neal Funeral Home at 10:00 a.m. on Saturday, December 5, 2020. Interment followed at Chapel Grove Cemetery in Lawrence County, TN. Neal Funeral Home was in charge of all arrangements. Condolences may be sent by way of: www.nealfuneralhome.net.