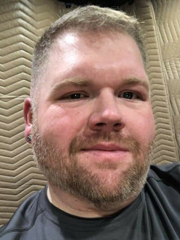 Benjamin Wayne Cox
Benjamin “Benji” Wayne Cox, age 42, passed away Friday, December 18, 2020 at Southern Tennessee Regional Health Systems in Lawrenceburg, TN.
Ben was born December 8, 1978 in Lawrenceburg, TN to Terry Cox and Pearl Luna Murphy.
He was the type of person who was always busy. Whether that meant pursing one of his many interests or getting to know someone, as Ben was always quite outgoing. He put great value in relationships with others, and would do anything to help someone else if he could. In his spare time Ben enjoyed operating his HAM Radio, not uncommon for those listening in to hear his call sign K4BNJ come across the airwaves. However, Ben’s greatest passions were motorcycles and kayaking. He enjoyed to ride and float alike. His favorite spot to kayak was on Shoal Creek with family. Ben was a proud member of the Sons of Confederate Veterans. He also was a member of Brace Baptist Church. A person couldn’t ask for a better friend or family member than Ben. He is deeply loved and will be dearly missed.
Ben is survived by his fiancé: Arielee Wright; sons: Daniel Wayne Cox, Preston Yokley-Owens, and Quinton Cox; grandson: Kason Cox; parents: Pearl (Mike) Murphy and Terry Wayne Cox; and brothers: Anthony (Molly) Cox and Duston Wright.
The family will have a private memorial service for Benjamin Wayne Cox at a later date. Williams Funeral Home is assisting the family with arrangements. Condolences can be given by way of: www.williamfh.com.