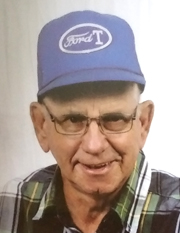 Hubert Lavon Garland
Hubert Lavon Garland, age 82, passed away on December 8, 2020, at Southern Tennessee Regional Health in Lawrenceburg, TN.
He was a self-employed do-er, a jack of all trades. He was a passionate farmer and mechanic. As many say, Hubert was a helluva mechanic, fixed anything and everything from the age of 10. He was a member of the Tennessee T’s and the Lawrence County Car Club, where he got to know members in his community that shared the same passion as him. Hubert left a great legacy for all of his family and all the lives that he touched.
He was born on January 16, 1938, to his late parents: George Leamon and Martha Louisa Cantrell Garland.
In addition to his parents, he was preceded in death by his sisters: Willowdean Glover and Artie Tice; brothers: Earl, Wayne, Rufus, Ruben, Carl.
He is survived by his loving mate: Belvie Joyce Garland; children: Timothy Garland and Kathy Garland (Terry); step-children: Diane Hernandez, Barry Henson; grandchildren: Jared (Josie) Garland, Bryson Garland, Joshua (Angel) Graves, Ashley Graves, Lacey Hernandez (McCullen), Anthony Hernandez, Candi Hernandez, Cameron Hernandez, Bobbie Jo Hendez; great-grandchildren: Anthony Graves, Logan Graves, Jenny Graves, Alice Graves; brother: Robert Garland; sisters: Dale Self and Nora (Ed) Matthews.
Williams Funeral Home & Crematory is assisting the family with arrangements. Condolences may be sent by way of: williamsfh.com.