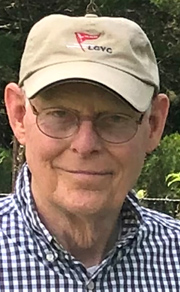 Ronald Paul Van Vickle
Ronald Paul “Rip” Van Vickle, age 75, passed away Friday, December 25, 2020, after a six-year battle with Alzheimer’s disease.
Ron was a devoted husband and a loving father. He was a singer and loved music. He loved living on Wilson Lake. He was an avid boater, golfer, and a member of Turtle Point Golf and Yacht Club where he carried the status of Commodore. He was an expert snow skier and a fixture of Summit County, Colorado where he skied with a great group of guys for forty plus years, until hanging up his skis in 2017.
He was a graduate of MTSU, a member of Kappa Alpha Fraternity, the Kiwanis Club, and Cumberland Presbyterian Church. He served his country honorably in the U.S. Army during the Vietnam Era. He was co-owner of Van Vickle Insurance in Lawrenceburg, TN.
He was preceded in death by his parents: Paul Junior and Frances Danley Van Vickle.
He is survived by his loving wife: Georgia “Pinky” Daughtry Van Vickle of Florence, AL; son: Rhett Van Vickle (Mary Tom) of Lebanon, TN; daughter: Lyndsay Claire Fukai (Hiro) of Opelika, AL; and brother: Danley Rhett “Dan” Van Vickle (Kathy LaRue) of Gulf Shores, AL.
A memorial service for Ronald Paul “Rip” Van Vickle will be held at a later date. Neal Funeral Home is in charge of all arrangements. Condolences may be sent by way of: www.nealfuneralhome.net.