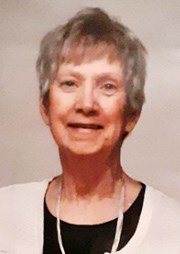 Jeanne Claire Doggett
Jeanne Claire Doggett, age 82, a resident of Lawrenceburg, went peacefully with the Lord on Friday, December 4, 2020 with her loving husband and family by her side.
She was born to the late Fuller and Marie Shanahan Duke on April 1, 1938 in Chicago, IL. She attended Incarnate Word Academy in Corpus Christi, TX and was a graduate of St. Francis Catholic High School in St. Joseph, MO. She was married on November 29, 1959 to her husband, John, for 61 years. Jeanne worked as a transcriptionist in the records department for doctors and hospitals throughout the country, while traveling with John who worked with the airlines. They settled in Lawrenceburg after many years of traveling. Jeanne was devoted Catholic, a loving wife, mother, grandmother and great grandmother as well as a friend to everyone who knew her.
She was preceded in death by her brothers: Tom, Bill, Bud, David, and Jack and her sisters: Vicki, Francene, Geraldine and Patricia.
In addition to her husband, she is survived by her five children: Mark (Paulette) Doggett of Semmes, AL, Francie (Joey) Icolano of Chelsea, AL, Kevin (Donna) Doggett of Fayette, AL, Rusty (Donna) Doggett of Greensburg, PA and Stephanie Woodhead of Hampton Hill in the UK; her grandchildren: Cedric Doggett, Megan Doggett, Angela Reaves, Stephen Icolano, Tony Icolano, Joe Doggett, Matt Doggett, Gary Lambert, Jamie Griffin, Joshua Taylor, Libby Woodhead and Bryce Woodhead; great-grandchildren: Daisy, Lucy, Adrian, James, Emma, Elle, Kalista, Allison and Noah; brother: Terry Duke of Belen, NM.
A Celebration of Life mass was held on Saturday, December 12, 2020 at 10:30 a.m. at Sacred Heart Catholic Church in Lawrenceburg, TN. Heritage Funeral Home was in charge of all arrangements.