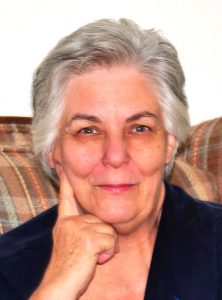 Rebecca Lauren Fergerson
Rebecca Lauren Fergerson was born on November 5, 1945 in Cookeville, TN to Rev. Marvin and Mildred Thompson. As a pastor’s family they moved around frequently. The majority of her childhood was spent in Florida. She would often reminisce about leaving the house early in the morning and walking though the orange groves and swimming in the lakes. She would be gone all day and didn’t have a care in the world.
She married at 17 to the late Thomas Edward Fergerson. Edward (Eddie) was in the military and they were stationed in Germany for several years. They returned to the States and had two daughters, Keeley and Petra. The Vietnam War took its toll on their marriage and our parents divorced when we were young. However, Rebecca always remained a child at heart. She made sure our childhood was wonderful. We were raised in the local creeks, in the woods, picking wildflowers and at Medieval Reenactment events. Divorced with young children and few resources she still made sure every Christmas was magical, even if she had to make our gifts. (Now we wish we still had them). When we grew up and got married her sons-in-law became her sons. Both “sons” lost their mothers young and she filled that spot for them. When we had children she was always there with a baby in her arms and a smile on her face.
She raised her grandchildren the same way she raised us. She loved the video game Zelda and played it with her older grandkids, and coached the younger ones through it. We think she played them all up to the latest release. Professionally she was a special education teacher in several TN counties. She retired from Marshall County in 2011. She loved every student she had. Rebecca was strong and independent, always giving to everyone. Always happy and joyful, she never let anyone know if she was having a hard time. She was truly the matriarch and cornerstone of our family. There is an empty chair now that we hope she sits in often and visits with us.
In our hearts we know you are having a grand party now and we are going to do our part and have one for you here like you asked. Mama (Nana to the grandkids), we miss you so much and we will always love you, infinity infinities. We will see you again.
Rebecca is survived by her daughters and “sons”: Keeley and Ruperto Mendez and Petra McPherson-Schoenbrun and Ira Schoenbrun; grandchildren: Aidan and Fiona McPherson, Summer and Phoenix Schoenbrun and Vivienne, Elena, and Jordy Mendez; five sisters: Lynn Bergeron, Sarah Turley, Kristi Ketchum, Melissa Thompson and Jennifer Thompson; various nieces and nephews.
Graveside services and burial for Rebecca Lauren Fergerson were conducted at 11:30 a.m. on Monday, January 4, 2021 at Freemon Cemetery. Pettus-Turnbo Funeral Home was in charge of all arrangements. Condolences may be shared by way of: www.pettusturnbo.com.