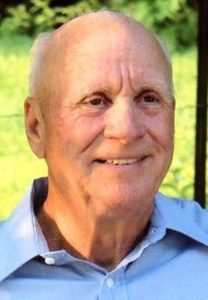 John Harold Webb
John Harold Webb, age 84 (born January 3, 1937) of Lawrenceburg, TN passed away Sunday January 3, 2021.
Known as John Harold by his devoted Ethridge friends and family who he loved dearly, he grew up in the Ethridge United Methodist Church, which he continued to visit often in his adult life. Mr. Webb served his country honorably in the U.S. Army as a Quartermaster from 1958 to 1960.  He also served in the U.S. Army Reserve for about 6 years.  He met his wife of nearly 60 years, Juanita Clanton of New Prospect, while attending the Middle Tennessee State Fair with his best friend Charlie Ray in 1960. He always said she was the most beautiful girl he had ever seen. Together they raised four children. Harold built his business, Harold Webb Insurance at 631 North Military Ave founded in 1960. He worked at Murray Ohio while he started selling insurance mostly to his fellow Murray employees. Many of his early clients still have insurance with him, which he always appreciated and talked about. His youngest son Steve joined Harold in the business in 1996.
When he was a young man, he was an active Jaycee doing many community service activities. He became a Rotarian at age 39 and had perfect attendance for 45 years. The Rotary motto “Service Above Self” was something that Harold truly lived up to on a daily basis. He was a Paul Harris Fellow and a constant blood donor.
Many of you who knew him would agree that you rarely meet a man like Harold. He was generous and would give the shirt off of his own back to help a person in need. Some of you may have been the beneficiary of that constant goodwill to others he embodied. If so, remember Harold Webb with a smile because to him life was about what he could give and not what he could gain for himself. Part of his service to others was visiting the sick and especially those in the area nursing homes. He never forgot his friends and I am certain they will never forget him.
Harold considered being a grandfather to his fifteen grandchildren the most wonderful part of his last twenty-three years. Once he had them, nothing else was more important to him. If you saw Harold out and about town, he was probably with at least one of them. His fifteen-year-old grandson and namesake, John Harold, was made an honorary Rotarian as a way to honor Harold by the Rotarians who love him.
He was preceded in death by his parents: John and Lorine Webb of Ethridge, TN; and brother: Donald Webb of Lawrenceburg, TN.
He is survived by his wife: Juanita Clanton Webb of Lawrenceburg, TN; one sister: Jean Heard of Manchester, TN; three sons: Jeff Webb (Gina) of Ocoee, FL, John Webb (Sheila) of Woodbridge, VA, and Steve Webb (Nadine) of Lawrenceburg, TN; one daughter: Martha Belew (Adrian) of Mt. Juliet, TN; two grandsons: John Harold and Titus (Steve); 13 granddaughters: Jennifer, Jessica, Ginger (Jeff), Ava, Leah (Martha), Rebecca, Laura, Rachel, Stephanie (John), Elise, Betsy, Ainsley, and Amelia (Steve); nieces: Donna Webb Patton and Sherry Webb Cornelius of Franklin, TN; and many more cousins, nephews, and nieces.
Graveside services and interment for John Harold Webb were conducted at 2:30 p.m. on Wednesday, January 6, 2021 at John Lay Cemetery in Ethridge, TN with military honors. Neal Funeral Home was in charge of all arrangements. Condolences may be made by way of: www.nealfuneralhome.net.