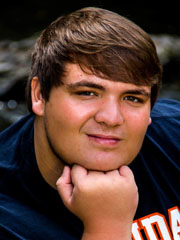 Dylan Osborn
Dylan Osborn, age 20, of Lawrenceburg, TN passed away Monday, January 18, 2021.
He was a native of Lawrenceburg, TN, former employee of Tractor Supply Company, and a member of Christian Fellowship Church. Dylan loved Jesus, his family, and football. His smile and laugh would light up a room. Dylan left this world, to be with the Lord, after a multiple-year battle with a disease he could no longer fight. He will be loved for eternity by those who knew him and missed with every breath. “The moment we close our eyes here, we will open them in heaven in a moment’s time.”
He was preceded in death by his sister: Destinee Gail.
He is survived by his grandparents: Danny and Sandy Osborn of Lawrenceburg, TN; one brother: Jase Osborn of Lawrenceburg, TN; and aunt: Brooke Osborn of Lawrenceburg, TN; many more family and friends.
Funeral services for Dylan Osborn were conducted at Neal Funeral Home at 1:00 p.m. on Saturday, January 23, 2021 with T. R. Williams and Gary Springer officiating. Interment followed at Bumpas Cemetery in Lawrenceburg, TN. Neal Funeral Home was in charge of all arrangements. The family suggests memorials be made to the National Suicide Prevention Lifeline. Condolences may be sent by way of: www.nealfuneralhome.net.