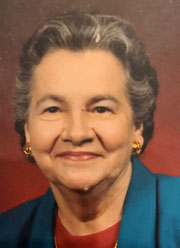 Velma Lorene Belew
Velma Lorene Belew, age 94, of Lawrenceburg, TN passed away Tuesday, January 19, 2021, at her residence.
She was a native of Lawrence County, TN, a homemaker, and a member of Salem Church of Christ.
She was preceded in death by her parents: Theodore and Rosie Ann Clayton Clifton; and her husband: Carnell Belew.
She is survived by three daughters: Linda Peters, Pat Patterson, and Barbara Norman (Ronnie), all of Lawrenceburg, TN; two sons: Ricky Belew (Jennie) and Randy Belew, both of Lawrenceburg, TN; nine grandchildren; twenty great-grandchildren; and two great-great-grandchildren.
Funeral services for Velma Lorene Belew were conducted at Neal Funeral Home at 3:00 p.m. on Friday, January 22, 2021 with Kevin Peters officiating. Interment followed at Bumpas Cemetery in Lawrenceburg, TN. Neal Funeral Home was in charge of all arrangements. Condolences may be sent by way of our website at www.nealfuneralhome.net.