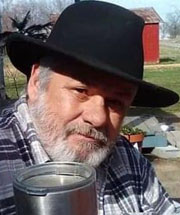 Jeffery Alan Shults
Jeffery Alan Shults, age 59, of Summertown, TN passed away Friday, January 29, 2021 at Maury Regional Medical Center.
Born on March 6, 1961 in Peoria, IL, Jeffery was the son of the late James Shults, Jr. and the late Janie Walters Shults. Jeffery enjoyed music and being outdoors, and had a great sense of humor. He was a big-hearted person who may have appeared like a grizzly bear on the outside but was a teddy bear on the inside.
Along with his parents, he was preceded in death by his brothers: Barry and John Shults.
He is survived by his sisters: Laquetta Marie Bosheers and Wendy Spearman, both of Summertown, TN; and seven nieces and nephews.
A graveside service for Jeffery Alan Shults will be held at 2:00 p.m. on Saturday, February 13, 2021 at Shaw Cemetery in Lawrenceburg, TN. Heritage Funeral Home is assisting the family with arrangements. Condolences may be shared by way of: www.TnFunerals.com.