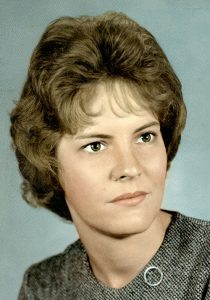 Joyce Ann (Johnson) Johnston
Joyce Ann (Johnson) Johnston, age 77, of Lawrenceburg, TN, passed away Tuesday, February 2, 2021 at St. Thomas/Rutherford Hospital in Murfreesboro, TN after an extended illness.
Joyce was born May 31, 1943 in Siler City, North Carolina. She graduated from Jordan Matthews High School in 1961. After high school she joined the US Navy and was stationed at the US Naval Photographic Interpretation Center in Suitland, MD from 1962 to 1965. There she met and married James L. “Buzzy” Johnston of Lawrenceburg, TN. After serving four years in the Navy she was employed as a long-distance operator with the Chesapeake and Potomac Telephone Company in Washington, D.C. In 1973 she moved with her husband to Lawrenceburg, TN where she was employed for several years as an assistant manager at Kmart.
She was preceded in death by her father: Fred Walsie Johnson; and mother: Allene Louise (Lopossay) Johnson of Siler City, NC; infant sister: Edna Earlene Johnson; sister: Mary Margaret Johnson; and two brothers: Robert and James Johnson, all of Siler City, NC.
She is survived by one daughter: Margaret Louise (Marty) Johnston of Lawrenceburg, TN; two sons: Joseph (Joey) Johnston of Nashville, and David Johnston (Jessica); granddaughters: Bailey-Ann Johnston and Brianna Edwards; and grandson: Bryce Edwards, all of Murfreesboro, TN. Several nieces and nephews also survive.
Funeral services for Joyce Ann (Johnson) Johnston were conducted at Neal Funeral Home at 1:00 p.m. on Saturday, February 6, 2021 with Marty Frakes officiating. Interment followed at Lawrence County Memorial Gardens in Lawrenceburg, TN with full military honors. Neal Funeral Home was in charge of all arrangements. Condolences may be offered by way of: www.nealfuneralhome.net.