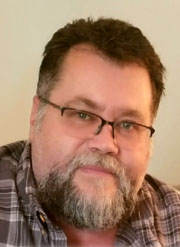 Timothy Wayne Holt
Timothy Wayne Holt, age 53, of Clifton, TN passed away Saturday, February 20, 2021 in Columbia, TN.
He was born in Savannah, TN on August 7, 1967 the son of Kenneth Ray and Lavern (Sussie) Halford Holt. On July 21, 2012 he was united in marriage to Holly Beth Howell, who survives.
Timothy received a degree in Pharmacology while living in Midland, TX. After he received his degree he opened a pediatric home health care. While living in Tennessee, Timothy was a pharmacist at Loretta Drugs. He was a member of Riverside United Methodist Church in Clifton, TN and was a member of the Medical Mission Team in Sinaloa, Mexico. Timothy loved cars, animals, being busy, and working around the house. He loved to travel and was baptized in the Jordan River.
Timothy departed this life on Saturday, February 20, 2021 in Columbia, Tennessee at the age of 53 years, 6 months and 13 days.
He is survived by his wife of 8 years: Holly Howell Holt of Clifton, TN; children: Isabella Ashley Holt (Chris Cooper) of Clifton, TN, and Christopher Wayne Holt of Las Vegas, NV; parents: Kenneth and Sussie Holt; brother: Keith Holt (Lisa) of Savannah, TN; nephews: Kyle Holt and Kaden Holt; and a host of additional nieces and nephews.
Services for Timothy Wayne Holt will be held at 11:00 a.m. on Thursday, February 25, 2021 at Shackelford Funeral Directors of Savannah in Savannah, TN with Shayne Riley and Josh Layne officiating. Burial will follow at Riverside Cemetery in Savannah, TN. Shackelford Funeral Directors of Savannah is in charge of all arrangements. Memorial donations may be made to Riverside Cemetery maintenance fund or to: Medical Missions Team, c/o Lorri Cooke, P. O. Box 676, Clifton, TN 38425.