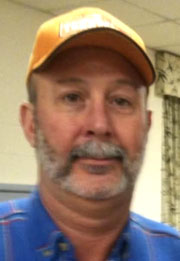 Randy “AL” Allen
Randy “AL” Allen, age 58, of Lawrenceburg, TN passed away Wednesday, February 24, 2021 after a long battle with Lou Gehrig’s disease.
Born September 17, 1962 in Ft. Hood/Bell County, TX, he was the son of Linda Ferguson Allen of Lawrenceburg and Ronald Allen of Leoma. He worked for DURA Automotive for 34 years. AL was a country boy at heart. He liked to go four-wheeling, fishing and spending time on the farm with his god-daughter, Paisley. He loved his friends and being outdoors
In addition to his parents, AL is survived by a brother: Tommy Allen of Lawrenceburg; and his god-daughter: Paisley Cozart of Lawrenceburg.
A memorial service for Randy “AL” Allen will be held at a later date. Heritage Funeral Home is assisting the family with arrangements. Condolences may be shared by way of: www.TnFunerals.com.