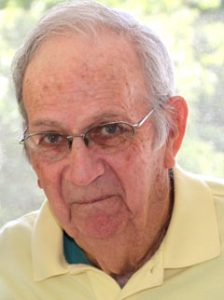 Walter Thomas McCluggage, Jr.
Walter Thomas McCluggage, Jr., age 87, of Greenwood, IN passed away Tuesday, February 23, 2021 in his home with his wife and daughters at his side.
He was born January 20, 1934 in Lawrenceburg, TN to the late Vona and Walter McCluggage, Sr. He was the fourth child of eight and worked very hard on the farm with his parents and siblings. He graduated from Lawrence County High School and went on to join the United States Air Force during the Korean War. He studied to become an Electric Engineering Technician. He also worked in the “Mess Hall,” cooking during basic training.
After the Air Force, he returned to Lawrenceburg and began dating Patsy Jane Davis, who he met at the Dairy Dip. They later married on June 2, 1957. Walter started working at NASA in Huntsville, AL where he worked on missiles that went to the moon. They had four daughters while living in Huntsville.
When he left NASA in 1968, he took a job at General Motors in Indianapolis, IN as an Electrical Engineering Technician working with lasers and holograms before anyone knew what holograms were. He had a very strong work ethic that he instilled in his children.
Walter McCluggage was a humble man. If he were here, I am sure he would be wondering “why everyone was making such a fuss.” He was and is greatly loved by his wife, children, grandchildren, and great-grandchildren.
Walter is preceded in death by: Opal McCain, Doris French, Joyce Dean McCluggage, Hollis McCluggage, Virgil Ray McCluggage, and great-granddaughter, Tali Brigham.
He is survived by his loving wife of 63 years: Patsy Jane (Davis) McCluggage; four daughters: Melissa Denise Graham, Jane Karen Smith, Jennifer Lynn (Bobby) Clancy, and Sandra Jean McCluggage; ten grandchildren; ten great-grandchildren; sister: Shirley Anne Sturgis; and brother: Wallace McCluggage.
Memorial services for Walter Thomas McCluggage, Jr. were held at 2:00 p.m. on Saturday, February 27, 2021 at Heartland Church of Christ in Greenwood, IN. Burial was at the family gravesite in Tennessee. Memorial donations may be made to the American Cancer Society.