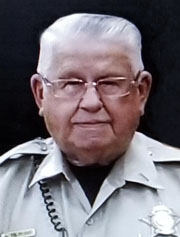 James Robert Rutherford
James Robert Rutherford was born June 27, 1937 and passed away January 23, 2021 at the age of 83, after a complicated battle with COVID.
He worked at Reynold’s Metal Company as a pipefitter for 31 years until he retired. He was a member of the Lauderdale County Reserves for 13 years as a Lieutenant. He was a loving father, husband, and grandpa.
He was preceded in death by his wife of 61 years: Doris Rutherford; his parents; three brothers; and one sister.
He is survived by his wife of two years: Lois Rutherford; daughters: Linda Faulkner (Phillip), Sandra Woods (Steve), Janice Neal (Mike), Sherry Chambers (Michael); stepdaughter: Cathy Kelley (Terry); stepsons: Ricky and Randy Appleton; grandchildren: Quentin Woods, Nathan Faulkner, Lori Self, Kane Chambers, Christi Neal, Ashley Nelson (Robert), Zach Kelley, and Ken and Ryan Appleton; eleven great-grandchildren; one great-great-granddaughter.
Funeral services for James Robert Rutherford were held at 2:00 p.m. on Wednesday, January 27, 2021 at Morrison Funeral Home, Central Heights with Bro. Billy George and Andy Corbet officiating. Burial followed at Macedonia Cemetery. Condolences may be made by way of: www.morrisonfuneralhomes.com.