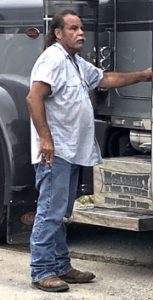 Thomas Edward Hughes
Thomas Edward Hughes, age 56, of Loretto, TN passed away Wednesday, April 7, 2021, at Maury Regional Medical Center.
Born on October19, 1964 in Lawrenceburg, Thomas was the son of the late Edward Lawrence Hughes, Jr. and the late Patricia Ann Gobble Hughes.
He is survived by his son: Thomas Dalton (Breanna) Hughes of Loretto; daughter: Ashleigh Hughes of Five Points; sister: Pattie Ann Davis of Lawrenceburg; the mother of his children: Brenda Hughes of Five Points; and a grandchild on the way in June.
The family of Thomas Edward Hughes will hold a celebration of life service at a later date. Heritage Funeral Home in Columbia is assisting the family with arrangements. Condolences may be offered by way of: www.TnFunerals.com.