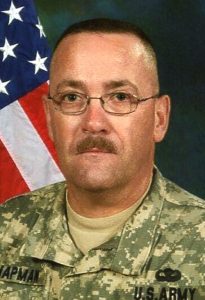 Allen Wade Chapman
Allen Wade Chapman, age 57, of Lawrenceburg, TN passed away Monday, April 12, 2021 at his residence.
He was a native of Lawrence County, TN, former Mayor of Lawrenceburg and was a retired Sergeant from the U.S. Army where he served his country honorably during Operation Enduring Freedom. He was a member of Ethridge Church of Christ.
He was preceded in death by his mother: Alma Jean Kelly Chapman; and one brother: Keith Chapman.
He is survived by his father: Hazel Chapman of Summertown, TN; one son: Evan Chapman (Rachel) of Culleoka, TN; one daughter: Sarah Kate Bailey (Tanner) of Sevierville, TN; one sister: Lynn Foster of Summertown, TN; and one granddaughter: Ava Chapman.
Funeral services for Allen Wade Chapman were conducted at Neal Funeral Home at 1:00 p.m. on Friday, April 16, 2021 with Roger Hamilton and Rodney Livingston officiating. Interment followed at Summertown Cemetery in Summertown, TN with full military honors. Neal Funeral Home was in charge of all arrangements. The family suggests memorials be made to Summertown High School Athletics. Condolences may be sent by way of: www.nealfuneralhome.net.