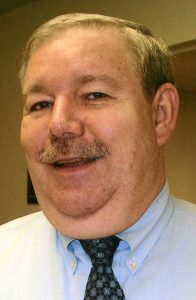 Dr. Larry Allan Loyd
Dr. Larry Allan Loyd, age 68, of Lawrenceburg, TN died Sunday, April 18, 2021, at his residence.
Raised in the New Prospect Community, he was a member of the New Prospect United Methodist Church. He was a native of Lawrence County and graduated from Lawrence County High School before entering Martin Methodist College where he earned an Associate’s degree in Math and Science. He continued his education at the University of Alabama at Birmingham where he received his Doctorate of Optometry in 1977. Following graduation, Dr. Loyd returned to Lawrenceburg where he practiced for forty-two years until his retirement in March of 2019. He was an avid fan of baseball and spent many years coaching Senior Babe Ruth.
Born on March 1, 1953, in Florence, AL, he was the son of the late Hardy Norvelle Loyd and Reva Lee Loyd.  In addition to his parents, he was preceded in death by his brother: William Hardy Loyd of Santa Fe, TN.
A devoted husband and father, he is survived by his wife of 46 years: Linda Lanning Loyd; one daughter: Laura Sandrell (Chris) of Columbia, TN; two sons: Charles Loyd (Abby) of Lawrenceburg and Samuel Loyd (Lynzi) of Murfreesboro, TN; seven grandchildren: Annlee Sandrell, Sadie Sandrell, Chase Sandrell of Columbia, TN, Lily Loyd, Annie Loyd, Will Loyd of Lawrenceburg, TN, and Leo Loyd of Murfreesboro, TN; sister-in-law: Dolly Loyd of Santa Fe, TN; nieces: Libby Loyd and Julie Loyd of Nashville, TN and Cindy Loyd (Nick) Fountotos of Scottsdale, AZ; one great niece: Peri Loyd Fountotos.
Services for Dr. Larry Allan Loyd were held Thursday, April 22, 2021 at 11:00 a.m. at Neal Funeral Home chapel with Bro. Billy Beal officiating. Interment followed at Shaw Cemetery in Lawrence County, TN. Neal Funeral Home was in charge of all arrangements. Condolences may be sent by way of: www.nealfuneralhome.net.
The Loyd family would like to express their deepest appreciation for the many friendships and memories he enjoyed over his lifetime. They requests memorials be made to St. Jude Children’s Research Hospital.