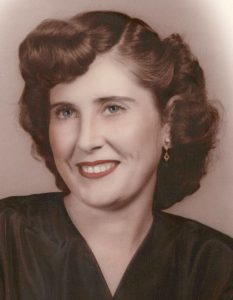 Edith Earline Sandy
Edith Earline Sandy, 92, of Waynesboro, TN went to be with her Lord on Saturday, April 24, 2021 at the Wayne County Health and Rehabilitation Center in Waynesboro, TN.
A native of Wayne County, she was the daughter of the late Henry and Cleo Gower Davis. Edith began working at a young age holding various duties at the Genesco Manufacturing plant until her retirement. She was a longtime member of the Waynesboro Church of Christ.
In addition to her parents, Edith was preceded in death by her husband: Hershel Sandy; brother: William Henry Davis, Jr.; and sister-in-law: Katherine Lee Davis.
Those left to cherish her memory include her brother: Clayton Davis; nieces: Patricia Castleman (John), Pam Davis, Tracey Copeland (Scott), Scarlet Seiber (Dwayne) and Rhonda Copous (Billy); nephew: Ricky Davis (Lynette); as well as several great nieces and nephews.
Edith’s family would like to extend their heartfelt thanks and appreciation to the nurses and caregivers at Wayne Health and Rehabilitation center, as well as Wayne County Assisted Living, and a very special thank you to Ms. Netty Sanderson, Janie Brewer, Judy Holt, and Cathy Brewer for their kindness and care during her final days.
Graveside services and burial for Edith Earline Sandy will be held at Wayne County Memorial Gardens on Wednesday, April 28, 2021 at 2:00 p.m. The family requests that all attendees please practice safe social distancing guidelines and wear a mask if at all possible. In lieu of flowers, the family requests that memorial contributions be made to Wayne Furnace Church of Christ. Pettus Turnbo-Funeral Home was in charge of all arrangements. Condolences may be sent by way of: www.pettusturnbo.com.