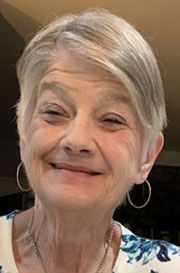 Reta Faye McDow
Reta Faye McDow, age 66, of Lawrenceburg, TN passed away Monday, April 26, 2021 at STRHS-Lawrenceburg.
She was a native of Lawrenceburg, TN, a CNA, and of the Christian faith.
She was preceded in death by her husband: Ronnie McDow; and parents: Clarence and Gertrude Huntley Price.
Survivors include her son: Will McDow (Amanda) of Lawrenceburg, TN; daughter: Kristy McDow (Paula) of Revilo, TN; brothers: Gary Price of Leoma, TN and Marty Price of Ethridge, TN; best friend: Trish Cross of Loretto, TN; six grandchildren; four great-grandchildren; several nieces and nephews.
A memorial service for Reta Faye McDow was held at Loretto Memorial Chapel at 4:00 p.m. on Tuesday, May 4, 2021 with family members officiating. Loretto Memorial Chapel was in charge of all arrangements. Condolences may be offered by way of: www.lorettomemorialchapel.com.