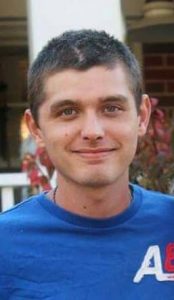 Will Clifton, age 30, of Lawrenceburg, TN passed away Monday, May 24, 2021, at his residence, from complications from previous head trauma in 2016.  He was a native of Summertown, TN, the weekend manager for Subway; and groundskeeper for Mt. Pleasant Housing Authority.

He was preceded in death by his paternal grandfather, Robert Clifton; and two cousins, Dusty Roberts and Cory Dedmon.

Arrangements are being handled by Neal Funeral Home, 231 N. Military Avenue, Lawrenceburg, Tennessee.  The family will receive friends from 4:00 PM to 8:00 PM Friday, May 28, 2021, at Neal Funeral Home.  Funeral services will be conducted at Neal Funeral Home at 11:00 AM Saturday, May 29, 2021, with Larry McAnally officiating.  Interment will follow at Pleasant Grove Cemetery in Lawrence County, TN.  Condolences may be sent by way of our website at www.nealfuneralhome.net.