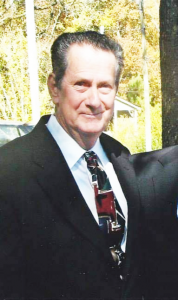 Mr. Clayton McDaniel, age 82 of Lawrenceburg, TN, gloriously passed from this life to walk with his Saviour on Friday, June 25, 2021. Clayton was born to Robert and Dorothy “Dot” McDaniel on August 19, 1938.
He is preceded in death by his Parents, Robert and Dorothy McDaniel; Brother, Trevis McDaniel.
Clayton is survived by his Wife of 56 years, Sharon Wentworth McDaniel; Son, Grant McDaniel (Paula); Daughters, Gina McDaniel Fabian and Marcy Andrea (Kelly), and his “adopted” daughter, Adele Stella; Brother, Rev. Wayne McDaniel. Clayton was blessed to have Seven Grandchildren, Hannah McDaniel (Tim), Becca McDaniel, Patrick McDaniel, Brian Fabian (Julia), Ashley Fabian Dillon (Josh), Brenton Andrea (Natalie), and Kelsey Andrea.
The icing on the cake is the four Great Grandchildren, Kalden Orr, Clayton Thomas Andrea, Riley Dillon, and Liam Dillon.
Clayton served his country in the Army from March 1962 to March 1964. He also worked Home Depot for 20+ years, 13 of which were in the Pulaski store. In addition to serving his country, Clayton was a minister of the Gospel and unselfishly served God’s people as a Pastor throughout churches in Louisiana, Florida, Alabama, and Tennessee for almost 50 years. It will be glorious when Clayton has a reunion with all these folks!!
A Memorial Service will be announced at a later date.
In lieu of flowers, donations can be made to the Alzheimer’s Association and the Hospice Compassus of Lawrenceburg, TN.
Condolences may be sent by way of our website at www.pettusturnbo.com
All arrangements to be handled by Pettus-Turnbo Funeral Home