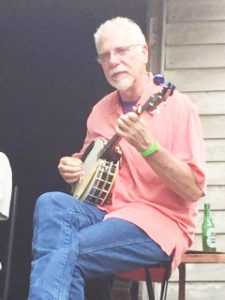 In Tennessee he is part of the large Richardson family, including Luke Richardson (whom he mentored in music), Sara and Eric Saliba, Diane’s children, and three step-grandchildren—Ben, Sam, and Kinza El Maliki—who lived next door in Nashville and called him “Papa Dog.” Their father, Zouhair, is a special friend as well. He has many friends from school, the corporate and music worlds in NY, TX, and TN

He attended St. James Elementary and Waverly High School, winning the Merrill Award for his artistic ability. He attended Mohawk Valley Community College and earned an Associate’s Degree in Visual Communication from the Art Institute of Pittsburg in 1976. His first graphic design jobs were in Ithaca, then Kelly Air Force Base in San Antonio. After moving to Nashville 30 yrs ago, in pursuit of music opportunities, he worked as Illustrator and artist for the Saturn car company, Bill Barnes, Design, Inc., The Tennessee Repertory Theater, freelance work on  Music Row doing album covers/ music packaging for famous recording artists, Deloitte & Touché, then had several satisfying years at Brookdale Senior Living as a Learning Media Designer until 2020. RonAult.net

From high school onward, Ron’s love and passion for music of all kinds led him to a rare mastery of many stringed instruments. He played in bands like the Hill Country Ramblers, the Secret Commonwealth, and backed up solo artists as well. He loved old time string band, Appalachian/Irish music, mastered the claw hammer banjo, and mentored others in these authentic sounds in many community circles.

In 2000, Ron met the love of his life, Diane, and they began their adventure with a creative wedding on the Tennessee River. They teamed up to host over 40 house concerts and many community arts collaborations over 21 years.

Ron will be remembered for his delightful sense of humor, quick-witted puns, his unique way of seeing the world, and his passion for making music almost every day of his life. After his cancer diagnosis in February of 2020, he went courageously through difficult treatments and continued to bring joy, meaning, and humor to many as he lived from the depths of his soul.

There will be a funeral mass /celebration of life at St. James Church in Waverly on July 10 starting at 10:30am with music offered by friends and family.  The service will be available on zoom and recorded and there’s a continuing circle till 4:30pm for open sharing of music he loved and good stories.. Zoom link coordinated by his niece Julianna Gray- see the “Circle of Friends and Family of Ron Ault” Facebook Group.