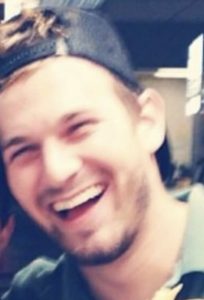 Cody Benjamin Cozart, age 30, passed away on June 26, 2021 in Dallas, TX. He was born September 29, 1990 in Redding, California. Cody was raised in Redding, until he moved to Loretto, Tennessee and graduated from Loretto High School where he shined on the football field on Friday night’s.  Cody served in the United States Navy on the amphibious assault ship USS Kearsarge where he was one of the prestigious “Sailor of the Year” nominees.

Cody always enjoyed exploring, walking, drawing, painting, making new friends and cherishing his old friends. He was a wanderer at heart and has been all over the world. His family and friends will always remember him as a man who valued kindness, love and company over everything else. He was sweet and kind to his core. Willing to give anything he had to anyone in need. He gave his only pair of shoes last winter to a homeless man because Cody felt the man needed them more than him. Cody had a smile that could light up a room and that no one will ever forget.

Cody is survived by his Mother, Shelly Foley; Father, Robert Shults and Benny Cozart, Brothers, Jake and Jordan Shults, and Bradley Cozart; Sisters, Whitney Robinson and Amarra Cozart, Grandparents; Kenny and Ruth Welcher and Rod Cozart and Laura Cozart-Patton; along with countless other family and friends that will love and miss him everyday.

In lieu of flowers, his family would love for you to donate to a homeless shelter or rehabilitation facility of your choice.

Cody’s visitation will be at the Loretto Memorial chapel in Loretto, Tennessee on July the 9th, 2021 from 4PM-6PM.  His service will follow directly after.