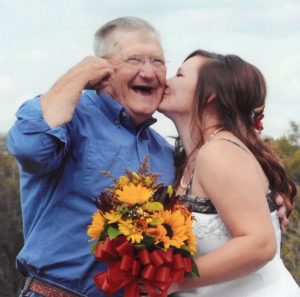 Charles Baker
Mr. Charles Baker, age 85, a resident of Columbia, passed away unexpectedly on Wednesday morning, July 28, 2021, just three days following the passing of his son, Carlton “Rocky” Baker.
Born April 11, 1936, in Williamsport, TN, Charles was the son of the late James Baker and the late Elizabeth Kelley Baker. He was married to Ruby Baker; whom preceded him in death on March 15, 2012. Charles was a long-time operator for the Williamson County Highway Department. He enjoyed going to visit the Amish community, and loved going coon hunting, listening to bluegrass music, eating chitterlins, and watching westerns on TV. Above all, he cherished the time he spent with his grandchildren, and great-grandchildren.
In addition to his parents, wife, and son: Charles is preceded in death by another son: Chuck Baker; one brother; and three of his sisters.
Left behind to cherish his memory are his sons: Curtis (Lori) Baker of Columbia, Clarence (Pat) Baker of Culleoka; daughter: Frieda (Gene) Bassham of Leoma; daughter in law: Charity Baker of Columbia; eleven grandchildren; sixteen great-grandchildren; and several nieces and nephews.
Funeral services for Charles Baker were held on Sunday, August 1, 2021 at 4:00 p.m. at Heritage Funeral Home with Curtis Baker and Allen Lancaster officiating. Heritage Funeral Home was in charge of all arrangements. Condolences may be shared by way of: www.TnFunerals.com.