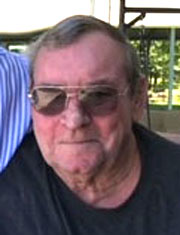 James Douglas “Mitch” Mitchell, Jr.
James Douglas “Mitch” Mitchell, Jr., was welcomed to his heavenly home on Thursday, July 29, 2021.
He was a United States Army Veteran and served in the Vietnam Era. Mitch worked at General Electric in Columbia and retired from GE in Decatur, AL. He was a mechanic who could fix anything, especially cars and motorcycles. He would even let his daughter, Karla try to work on cars beside him, “So she would learn something!”
Papaw was his favorite title. He “loved” waiting in line to pick up grandkids in their personal school bus! The grandkids were the only ones allowed to use his TV remote and play with his wristwatch whenever they wanted! He was a kind, sweet man who always said thank you for anything done for him. Mitch will be missed by many.
He was preceded in death by his parents: James Douglas Mitchell, Sr. and Mildred Irene Smith Mitchell; his wife: Donna Davenport Mitchell; two brothers-in-law: Wendell ONeal and Joey Flippo.
He is survived by one daughter: Karla Vincent (Eddie) of Kingston Springs, TN; three grandchildren: Ellis Thuresson, Kasper Thuresson, and Elliette Vincent; one sister: Debbie ONeal of Mt. Pleasant, TN; sister-in-law: Shellia Flippo of Summertown, TN; brother-in-law: Tim Davenport of Summertown, TN; and mother-in-law: Jeanie Davenport of Summertown, TN.
Funeral services for James Douglas “Mitch” Mitchell, Jr. were conducted at Neal Funeral Home at 12:00 p.m. on Saturday, July 31, 2021 with Jeff Smith officiating. Interment followed at Chapel Grove Cemetery in Lawrence County, TN with full military honors. Neal Funeral Home was in charge of all arrangements. Condolences may be sent by way of: www.nealfuneralhome.net.