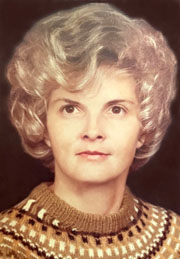 Virginia “Ginger” Lavanda Wilburn
Virginia “Ginger” Lavanda Wilburn, age 78, of Leoma, TN passed away Tuesday, August 3, 2021 at Maury Regional Medical Center.
Born in Bonham, TX, she was a retired optician of 40 years who was a caring and beloved mother. In their early years, she and her husband traveled the world together while he was serving in the United States Air Force. In their later years, they bought an RV and continued traveling the country. She was of the Baptist faith.
She was preceded in death by her son: Michael Ray Wilburn; and grandson: Sean Wilburn.
She is survived by her husband: Harold “Ray” Wilburn; daughters: Teri Wilburn of Lawrenceburg, TN and Cristie Wilburn of Denver, CO.
Funeral services for Virginia “Ginger” Lavanda Wilburn will be announced at a later date. In lieu of flowers, memorial contributions may be made to St. Jude Children’s Hospital. Pettus-Turnbo Funeral Home is in charge of all arrangements. Condolences may be offered by way of: www.pettusturnbo.com.