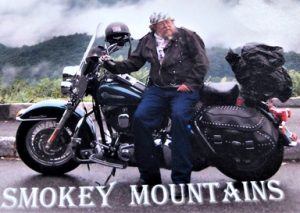 James Norman Lightfoot
James Norman Lightfoot, age 71, husband of Anita “Sue” Lightfoot, and a resident of St. Joseph, TN, passed away Friday, August 20, 2021 at Maury Regional Medical Center.
Born on July 29, 1950 in East Liverpool, OH, James was the son of the late Arthur Lightfoot and the late Florence Morden Lightfoot. He married Anita “Sue” Farnsworth on March 2, 1974 and together they had three sons. He worked thirty years for General Motors before retiring in 2000. A true outdoorsman, James was an avid motorcycle rider who also enjoyed camping, throwing horseshoes, and canoeing. He had a great sense of humor and was well loved and respected by those who met him. James was a wonderful man and a loving husband, father, grandfather, and brother who will be deeply missed.
Along with his parents, he was preceded in death by his brother: Fred Lightfoot; and sister-in-law: Mary Lightfoot.
In addition to his devoted wife, Sue, he is survived by his sons: Harley (Samantha) Lightfoot and their daughter, Taylor Lightfoot of Edgewater, FL, Joshua Lightfoot of St. Joseph, TN, Seth Lightfoot and his children, Dakota, Aubree, and Parker Lightfoot of Newton Falls, OH; sister: Beverly Korda of Salem, OH; aunt: Lucille McKinney of St. Cloud, FL; brother-in-law: Bill (Cecilia “Punk”) Farnsworth; sister-in-law: Darlene Anderson; and numerous nieces, nephews and cousins.
The family has chosen to have no public service. Heritage Funeral Home in Columbia, TN is assisting the family with arrangements. Condolences may be shared by way of: www.TnFunerals.com.