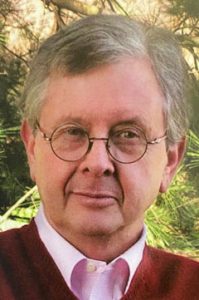 Jerrod “Jerry” Ray Daniels
Jerrod “Jerry” Ray Daniels, born November 27, 1943, in Lawrenceburg, TN died on Sunday, August 22, 2021 in Georgia, where he moved in late March.
He was the son of the late Rex Ray Daniels and Adrienne Laverne Hardison Daniels, both of Lawrenceburg, TN.  He graduated from the University of Tennessee with a B.A. in History and Masters in History. He was a member of Sigma Phi Epsilon fraternity. He went on to receive his J.D. from Memphis State University. While working for Governor Buford Ellington, Jerry met his life-long friend and former wife, Ann. Together they put all their heart and soul into raising their beloved daughter, Ki, and they remained friends for life.
An avid lover of history and politics, Jerry spent many of his early years in Nashville involved with Tennessee politics, becoming a delegate for Tennessee for both the 1968 and 1972 Democratic Conventions. He worked for many years for the State of Tennessee in various roles in the Department of Health and Human Services. Eventually he retired from the State to pursue other opportunities as a corporate lawyer for various organizations. He also taught and mentored young men in the Associates program for the Nashville Auto Diesel College. He remained close with many of those students through the years and guided them whenever they needed him.
When Jerry was not working, he loved spending time with his menagerie of pets, collecting antiques, and creating beautiful landscapes in his yard. He also was a successful author of two published novels and many other creative works. Known for his witty ways and great sense of humor, Jerry left many laughing, and his laugh will be missed by all.
He is survived by his daughter: Kathryn Adrienne (Ki), now living in Atlanta; his sisters: Suzanne Hermsdorfer and Laura Kinnard (Jon), both of Franklin, and Jayne Daniels of Murfreesboro; nieces: Leslie McRuiz (Steve) and Lori Marlin (Marshal); and nephew: Campbell Kinnard.
Jerry’s family is particularly grateful to the Kindred Hospice and his sitters for their kind and tender care. There will be a memorial service at West End United Methodist Church in Nashville, TN on Friday, September 3, 2021 at 11:00 am. In lieu of flowers, his family requests that contributions be made in his name to the Nashville Humane Society or Friends of Radnor Lake. Marshall-Donnelly-Combs Funeral Home, 201 25th Ave. North, Nashville, TN 37203 was in charge of all arrangements.