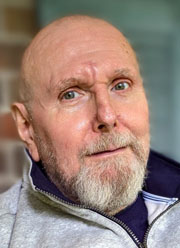 Roger Dale Jackson
Roger Dale Jackson, age 72, of Loretto, TN passed away Friday, August 27, 2021 at Maury Regional Medical Center surrounded by loved ones, after a courageous two year battle with leukemia.
He was a native of Lawrence County, TN who proudly served our nation in the United States Navy during the Vietnam War. He was a former boilermaker who retired as an engineering associate from TVA. He previously served as a Commander of the local VFW, as a Lawrence County Election Commissioner and served many years as a delegate for the Lawrence County Democratic Party. He loved his family, friends, and community dearly and lived a life of service to others.
He was preceded in death by his mother: Irma Marie Jackson; and brother: Larry O’Neal Jackson.
He is survived by his wife: Judy Jackson, Loretto, TN; son: Chris D. Jackson (Kailea), Loretto, TN; daughter: Jessie Boyd (Nick), Lawrenceburg, TN; grandchildren: Theo Jackson, Loretto, TN, Lilian Boyd, Murfreesboro, TN, and Brown Boyd and Nate Boyd, both of Lawrenceburg, TN.
Memorial services for Roger Dale Jackson were held at Loretto Memorial Chapel on Monday, August 30, 2021 at 1:00 p.m. with TR Williams officiating. His son Chris also provided a eulogy. Military honors were presented to the family following the service. Loretto Memorial Chapel was in charge of all arrangements. The family would like to express special thanks to Dr. Romany Johnpoulle and Dr. Will Donnellan for their wonderful care and friendship over the past two years. In lieu of flowers, memorial donations may be made to the Local Disabled Veterans Chapter #20.