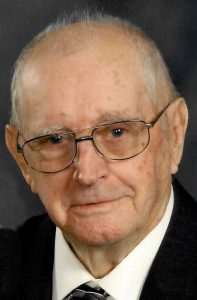 James R. “Bobby” Smithson
James R. “Bobby” Smithson, 98, a retiree of Union Carbide, died Tuesday, September 7, 2021 at the Bridge of Columbia where he had resided for eleven years.
A native of Maury County, he was born May 3, 1923 to the late Johnny Elmer and Alma Rummage Smithson. As a young man, he worked on the family farm of his grandparents, Algie and Ida Rummage, on the Sowell Mill Pike. On March 10, 1944 he married Virginia Lovett Smithson, who preceded him in death on May 29, 2016, after 72 years of marriage. Together they reared their large family on this farm on the Sowell Mill Pike. He enjoyed hunting and fishing, building birdhouses, and making lap quilts, which he proudly gifted to family and friends. At the Bridge, he enjoyed bingo and working puzzles. He was a member of the Graymere Church of Christ, where he was active in the Seniors Program.
In addition to his parents and wife, he was preceded in death by a daughter: Mary Kay Smithson; and a brother: Howard Smithson.
He is survived by his children: Gayle (Larry) Benderman, Ronnie (Kathleen) Smithson both of Columbia, TN, Martha Davis of Hernando, FL, Bill (Wanda) Smithson of Leoma, TN, Emily (Lionel) Panter of McMinnville, TN, Larry (Kathy) Smithson and Carol (Jerry) Dickey both of Columbia, TN; thirteen grandchildren; twenty-two great-grandchildren; six great-great-grandchildren, plus a great-great-grandson due in October.
Graveside services for James R. “Bobby” Smithson were conducted Thursday, September 9, 2021 at 11:00 a.m. at Rock Springs Cemetery with Wendell Robinson officiating. Oakes & Nichols Funeral Home was in charge of all arrangements. The family suggests memorials be made to Columbia Academy, 1101 West Seventh Street, Columbia, Tennessee 38401. Condolences may be extended online by way of: www.oakesandnichols.com.