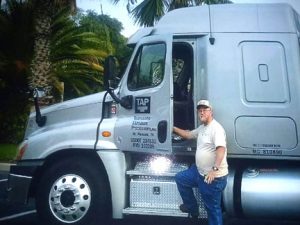 Terry W. “Cookie” Cook
Terry W. “Cookie” Cook, age 58, of Mount Pleasant, TN passed away Sunday, September 5, 2021 at Maury Regional Medical Center.
Terry was born on November 29, 1962, to the late James Thomas Cook, Jr. and Georgia Ann Lentz Cook in Maury County, TN. At a young age, he found a love in racing. He loved being at the track with his dad and later on with his family and friends. Hunting and fishing were the things he loved to do if he was not at the racetrack or working on cars or dump trucks. He especially loved camping during the summer at the river (Deer Creek) with his family. Terry worked at TAP for several years as a mechanic. Before TAP he worked for Steven McCanless Trucking for 26 years. His blue Kenworth Truck was always his favorite. You could always find Terry with his Red Man Chewing Tobacco in his pocket. He never left home without it. Most of all, he enjoyed spending every minute with his precious grandbabies that were his world. He did any and everything they asked.
In addition to his parents, Terry was preceded in death by his in-laws: Paul and Ruby Massey.
He is survived by his wife of 38 years: Tammy Massey Cook; sons: Justin and Ricky Cook; two grandchildren: Braylon and Braydn Cook; sisters: Anita “Sissy” (Dwight) Brown and Jennifer (Cheyenne) McNeese; several nieces, nephews and a host of friends and trucker buddies.
The family would like to give a special thanks to Phillip and Mindy Counts for all of their support, Thunder Hill Raceway, Jason Walker, Ricky Spurgeon, Matthew Dinwiddie and Frank Workman. Williams Funeral Home is in charge of all arrangements. Condolences may be offered by way of: www.williamsfh.com.