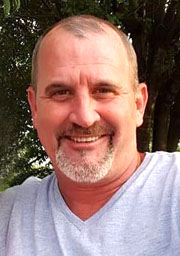 Rickey Redd
Rickey Redd, age 48, of Columbia, TN passed away Tuesday, October 12, 2021 at his residence.
He was a native of Lawrenceburg, TN, employed with Civil Construction, and a member of Construction Owners Association of the Tri-State. He was of the non-denominational faith and was a believer in Christ.
He was preceded in death by his father: Rickey Redd, Sr.
He is survived by his mother: Terri Redd (Fred Butler) of Columbia, TN; two sons: Brady Redd (Brooklyn) and Dylan Redd (Kristin Harris), both of Lawrenceburg, TN; one brother: Joshua Redd (Melissa) of Lawrenceburg, TN; special friend: Beth Bryant of Columbia, TN; three grandchildren: Reecelyn Redd, Ruby Redd, and Roman Redd; and several nieces and nephews.
Funeral services for Rickey Redd were conducted at Neal Funeral Home at 11:00 a.m. on Friday, October 15, 2021 with David Morgan officiating. Interment followed at Mimosa Cemetery in Lawrenceburg, TN. Neal Funeral Home was in charge of all arrangements. Condolences may be offered by way of: www.nealfuneralhome.net.