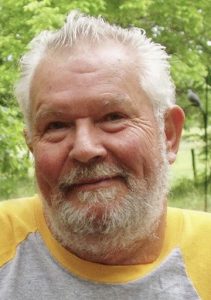 Raymond Lawrence Ellis
August 27, 1941 – October 13, 2021
Raymond Lawrence Ellis, age 80, was born in Lawrenceburg, TN where he attended Sacred Heart Catholic School. When he was a preteen his family moved to Toledo, OH where he attended Macomber High School. His family was part of the great migration taking place during the post-war industrial boom when many Southerners headed north looking for work. He did not want to go. He told his friends and his co-workers he was moving back to Tennessee as soon as he could afford it. He worked as a roofer for several years and then became a boilermaker at the American Ship Building Company, building lake freighters. He married, raised five boys, and made numerous trips back to Tennessee. When younger, he would proudly point out the roofs he had installed as he drove the family around the neighborhood. Later he loved to talk about the lake freighters he built or repaired including the Edmund Fitzgerald. Before he retired, he purchased property that had been in the family since the days of Davy Crockett. When the shipyard closed down he made his move; he realized his dream. He spent his last 25 years on the old family farm just west of Lawrenceburg raising unusual breeds of cattle, goats, chickens and pigs. He also experimented with hybridizing new colors of Gouldian Finches and day lilies.
Those who were lucky enough to know Ray know that he loved to fish, drink beer, fish, garden, fish, and swap fish tales. In his youth it was coon hunting and in his later years he hunted mushrooms. He has been seen actually giving a friend the shirt off his back. And because he bought his parents’ house in Toledo, and his great-grandparents’ farm in Tennessee, his home was always the family homestead, the gathering place, where the extended family and neighbors would gather for fish fries, tacos, a backyard B-B-Q, a few cold beers, and often a little picking and grinning bluegrass jam session.
He was preceded in death by his mother and father: Ruby (Clanton) and Fred Ellis. He was the last of the twelve brothers and sisters: Joseph Gregory, Anna Catherine, Bernard Raphael, Frederick Joseph III (Sam), Vernor Marie, Charles Aaron, Dorothy Louise, Joan Lorraine, John Francis, Raymond Lawrence, Martha Aileen, Michael Adrian.
He is survived by his sons: Bruce, Raymond, Brian, Gary and Barry; ten grandchildren; and at least eight great-grandchildren. His girlfriend of 18 years, Linda, still tends the chickens and puppies on the farm.
His love for a life well lived will live on in his five boys, his grandchildren, and all who were fortunate enough to call him dad, Uncle Ray, or ‘Papa Ray.’