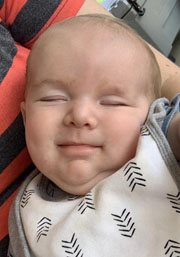 Dallas J. Dickson
Dallas J. Dickson, the infant son of Dash and Payton Dickson of Lawrenceburg, TN passed away Friday, October 29, 2021.
He was preceded in death by his grandfather: Andy Dailey; and his grandmothers: Cindy Love and Janet Fletcher.
Along with his parents, he is survived by two brothers: Dash Bo Dickson and Damion Dickson; one sister: Delaynee Dickson; and his grandmother: Kita McGee, all of Lawrenceburg, TN.
Funeral services for Dallas J. Dickson were conducted at Neal Funeral Home at 3:00 p.m. on Thursday, November 4, 2021. Burial followed at Bumpas Cemetery in Lawrenceburg, TN. Neal Funeral Home was in charge of all arrangements. Condolences may be sent by way of: www.nealfuneralhome.net.