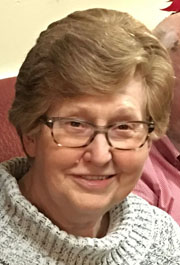 Nellie Marie (Nell) Remke
Nellie Marie (Nell) Remke, age 87, passed away Friday, October 29, 2021, after an extended illness.
Nell attended Sacred Heart Catholic Church and was a life-long resident of Lawrence County. She earned an Associate’s degree from Columbia State Community College, and retired from the Lawrenceburg Power System after over forty-years. She enjoyed her years in the Pilot Club, her travels with the First Farmers Chairman’s Club and was especially fond of musical theater.   Anyone who knew Nell was touched by her kindness and humility. She was fondly called the Mayor of Admiral Circle, and was an avid walker in her neighborhood. She was a loving Aunt and friend, and well known for her love of animals.
She was the daughter of the late Andrew and Alma Remke and was preceded in death by her siblings: Helen Evers (Mickey), Rose Anne Remke, Edward Remke (Ira), James Remke (Retha) and Clarence Remke (Anna Bell-surviving).
She is survived by niece: Janice Evers; and nephew: Bobby Evers (primary caregivers); as well as many other special nieces, nephews and friends.
The family extends our deep appreciation to the staff at The Summit of Lawrenceburg for the love and care she received during many enjoyable years there, and our gratitude to the staff at NHC Scott for all their kindness.
Funeral mass for Nellie Marie (Nell) Remke was conducted at Sacred Heart Catholic Church of Lawrenceburg at 11:00 a.m. on Wednesday, November 3, 2021 with Father Forsythe officiating. Interment followed at Calvary Cemetery in Lawrenceburg, TN. Neal Funeral Home was in charge of all arrangements. In lieu of flowers, the family requests donations to Sacred Heart Catholic Church – Saving Our Heritage Fund, or Friends of Lawrence County Animals (FOLCA). Condolences may be sent by way of: www.nealfuneralhome.net.