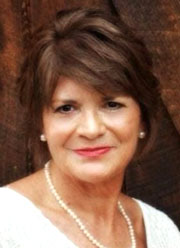 Angela Faye Rucker Reeves
Angela Faye Rucker Reeves, age 64, of Murfreesboro, TN passed away Tuesday, December 7, 2021 at Saint Thomas Rutherford Hospital in Murfreesboro, TN.
She was a native of Lawrence County, TN and was employed as a patient financial advocate with the Middle TN Ambulatory Surgery Center and a part-time receptionist with the Murfreesboro Police Department. She was a member of Seeds Church of Rockvale.
She was preceded in death by her mother: Charlsie Williams Rucker.
She is survived by two daughters: Mindy McGee (Dennis) of Leoma, TN and Brooke Brazier (Scott) of Loretto, TN; one son: Michael Reeves (Keri) of Loretto, TN; her father: Harold Rucker of Lawrenceburg, TN; one sister: Freda Barber (David) of Murfreesboro, TN; father of their children: James Reeves of Loretto, TN; special friend: Jerry Rosson of Murfreesboro, TN; and was Granna to twelve grandchildren and one great-granddaughter.
Funeral services for Angela Faye Rucker Reeves were conducted at Neal Funeral Home at 1:00 p.m. on Saturday, December 11, 2021 with Fay Tucker officiating. Interment followed at Leoma Cemetery in Leoma, TN. Neal Funeral Home was in charge of all arrangements. Condolences may be sent by way of: www.nealfuneralhome.net.