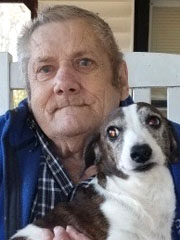 Roger David Enfinger
Roger David Enfinger, age 71, of Leoma, TN passed away Tuesday, December 7, 2021 at North Alabama Medical Center in Florence, AL.
He was a native of Dothan, AL, retired from Jones Apparel, and of the Baptist faith.
He was preceded in death by his parents: Leonard Lee and Effie Mae Gilmer Enfinger; three brothers: John Enfinger, Buddy Enfinger, and Danny Joe Enfinger; and one sister: Susie Hall.
He is survived by his wife: Mattie Enfinger of Leoma, TN; one daughter: Annette Jett (Robby) of Lawrenceburg, TN; one son: Wesley Enfinger of Lawrenceburg, TN; one sister: Mary Frances York of Texas; seven grandchildren; and one great-grandchild.
A memorial service for Roger David Enfinger will be conducted at Word of Life Ministries at 2:00 p.m. on Saturday, January 8, 2022 with Gary Vance officiating. Neal Funeral Home is in charge of all arrangements. Condolences may be sent by way of: nealfuneralhome.net.