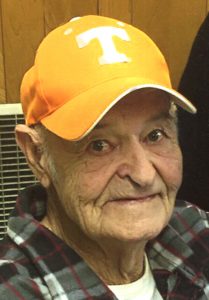 James O. “Buddy” Frazier
James O. “Buddy” Frazier, age 84, of Summertown, TN passed away Saturday, January 8, 2022 at his residence, surrounded by his family.
He was a native of Lawrence County, TN and a graduate of Lawrence County High School. He made a career in the mining industry and retired from Dravo Basic Materials and Rogers Group, Inc. He was a faithful member of Summertown Church of the Nazarene for 40 years where he served as an Associate Pastor and a Sunday School Teacher. He was also a former Gideon. Mr. Frazier served his country honorably in the U.S. Army. He loved God, his family, hunting, and fishing.
He was preceded in death by his parents: Blackburn and Daisy McKissack Frazier; and two sisters: Iva Nell Thompson, and Peggy Johnson.
He is survived by his wife: GayNell Johnson Frazier of Summertown, TN; one son: Tony Frazier (Patsy) of Summertown, TN; one daughter: Sabrina Hendrix (Mitch) of Summertown, TN; six grandchildren: Krystle Peterson (Luke), Andrea Hardy (Jon), Hailey Leighton (Heath), Courtney Shelton (Ross), Larkin Paul (Daniel), and Logan Hendrix (Regina); thirteen great-grandchildren; and one sister: Judy Springer of Cumberland Furnace, TN.
A memorial service for James O. “Buddy” Frazier was conducted at Neal Funeral Home at 2:00 p.m. on Thursday, January 13, 2022 with Steve Queen officiating. Inurnment was held at Mt. Moriah Cemetery. Neal Funeral Home was in charge of all arrangements. The family suggests memorials be made to The Gideons International. Condolences may be sent by way of: www.nealfuneralhome.net.