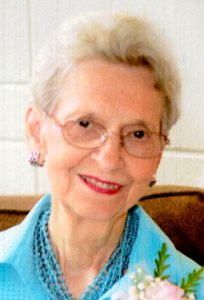 Roberta Elizabeth Niedergeses Vernon
Roberta Elizabeth Niedergeses Vernon departed this life on Tuesday, March 1, 2022 after an extended illness.
She was born on July 9, 1923 to Frank and Cecilia Niedergeses; the couple’s fourth child and first daughter. She grew up on the farm in the hollow off Gimlet Road, attending elementary school at Sacred Heart School in Lawrenceburg. After graduating eighth grade, she went to school at Lawrence County High School for four years where she was chosen “Most Studious” by the student body her senior year, 1941.
During World War II, she lived in Memphis, TN, where she worked with a group of friends in a job to support the war effort. After the war ended on both fronts, she returned to Lawrenceburg, where she was employed as a bookkeeper. She married Roy Brandon Vernon on September 14, 1950 and the couple took up residence at 204 Caperton Avenue. They had five children, and Roberta was happy as a housewife taking care of the home and children until all were in school. Then she went to work part-time for Parks Motor Company. Later, she was employed by Niedergeses Brothers Grain and Implement Company as a bookkeeper. She retired from this job in 1990.
Roberta was a lifelong member of Sacred Heart Catholic Church, attending daily Mass and often going to walk the track at the armory with her sister afterwards. She continued these practices until her health deteriorated to the point she could no longer drive. Roberta loved her grandchildren and was often involved in babysitting for one group or another.
She is survived by her five children: Frances (Harry) Brandon, Martha (Robert) McLeer, Michael (Genese) Vernon, Alice (Doug) Hopper, and Jan Shaw. In addition, she is survived by eleven grandchildren: Adam Brandon, Kristi Griffin, Kaylee Harmon, Matt McLeer, Meaghan McLeer, Ryan Umphrey, Keri Reeves, Kevan Vernon, Nick Hopper, Chris Batson, and Carson Shaw; thirteen great-grandchildren; one sister: Louise (Jay) Fleeman; and numerous nieces and nephews.
Funeral Mass for Roberta Elizabeth Niedergeses Vernon was held Friday, March 4, 2022 at 10:00 a.m. at Sacred Heart Catholic Church. Interment followed at Calvary Hill Cemetery. Pettus-Turnbo Funeral Home was in charge of all arrangements. Condolences may be sent by way of: www.pettusturnbo.com.