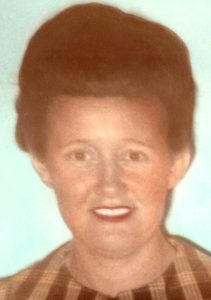 Thelma Tonguett
Thelma Tonguett, age 86, of Lawrenceburg, TN passed away on Tuesday, March 15, 2022 at NHC Scott.
She loved reading. She retired from Scott Hospital and would later become a private duty healthcare-giver. She will be remembered as a sweet person with a quick wit and was an inspiration to all of those she became close with. She had strong Christian beliefs and loved to read her Bible.
She was preceded in death by her parents: John and Nannie Tonguett; twin sister: Velma Tounguett; five brothers; one sister; godchild: Adam Pennington.
She is survived by her best friend: Bernadine Davis; friend: Martha Belew; cousin: Peggy McCandless; several nieces and nephews; and many friends.
Graveside services for Thelma Tonguett were held at John Lay Cemetery at 1:30 p.m. on Thursday, March 17, 2022. Pettus-Turnbo Funeral Home was in charge of all arrangements. A special thanks to the Nurses and staff at NHC Scott for the care and love they extended to Ms. Thelma. Condolences may be offered by way of: www.pettusturnbo.com.