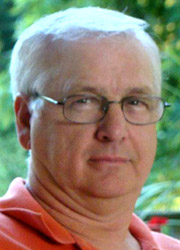 Larry O’Neal Thompson
Larry O’Neal Thompson, 75, of Collinwood, TN went home to be with his Lord and Savior on the afternoon of Friday, April 1, 2022.
He was born on February 21, 1947 to the late Lenard and Ruby Thompson. He was united in marriage to the love of his life of 55 years, Janice Dodd, on July 2, 1966. He spent a lifetime of work at Maury Ohio and after retirement he always kept busy. He operated a saw mill and worked at Thompson Farm’s chicken barn. He never met a stranger. He enjoyed talking to everyone he met; especially talking to people on the phone. He had a love for gardening, riding his horse, country music, John Wayne movies, and working on anything outdoors. Larry was a faithful man who deeply loved the Lord, his family, and Butler Grove Freewill Baptist where he was a devoted member. He always put Christ first in his life and this devotion to Christ is also shared by his wife and children. He will be forever missed but Larry knew Christ as his Savior and has a home in Heaven with Him. One day, if we know Him, we too will join him.
In addition to his parents, he was preceded in death by his brothers: Dwayne and Dwight; and sisters: Regina and Reba Thompson.
He is survived by his wife: Janice Thompson; children: Steven Thompson and Tammy Bailey; brothers: Joe Thompson, Dennis Thompson, Donald Thompson; grandchildren: Maggie, Mallie, Austin, Chelsea; great-grandchildren: Caysen, Klye, Kagen, Parker and Preston.
Funeral services for Larry O’Neal Thompson were held at 3:30 p.m. on Sunday April 3, 2022 at Shackelford Funeral Directors, Collinwood, with Brant Sanders and Chad Clanton officiating. Burial followed at Memorial Gardens of Collinwood, TN. Shackelford Funeral Directors was in charge of all arrangements.
John 11:25-26 Jesus said unto her, I am the resurrection, and the life: he that believeth in me, though he were dead, yet shall he live: And whosoever liveth and believeth in me shall never die. Believest thou this?