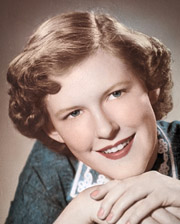 Patsy Lee Weaver
Patsy Lee Weaver, age 85, of West Point, TN passed away Friday, April 1, 2022 at Maury Regional Medical Center.
Born on January 5, 1937, in New Prospect, TN, Patsy was the daughter of the late Joe Petty Richardson and the late Cora Gunnell Richardson. She was a 1953 graduate of Lawrence County High School and worked twenty-two and a half years as a medical clerk for Crowder Clinic in Lawrenceburg before retiring in 1999. Patsy was a member of West Point Methodist Church.
In addition to her parents, she was preceded in death by her husband: James H. Weaver, Jr.; and sister: Mildred Asplint.
She is survived by her daughter: Judith Lee Weaver; sons: Joe (Cathy) Weaver, John (Amy) Weaver; brother: Nelson (Arlene) Richardson; three grandchildren; and eight great-grandchildren.
The family will celebrate the life of Patsy Lee Weaver with a graveside service at a later date. Heritage Funeral Home in Columbia, TN is assisting the family with arrangements. Condolences may be offered by way of: www.TnFunerals.com.