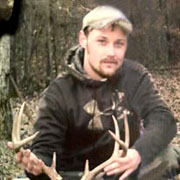 Cameron W. McKissack
Cameron Wayne McKissack, age 33, passed away too soon doing the things he loved on Saturday, April 2, 2022 in Summertown, TN.
He was born March 1, 1989 to Wayne and Rebecca McKissack in Columbia, TN. He was a true country boy. He was always his happiest when he was outdoors. He would look in rock beds and wooded trails, hunting for the perfect arrowheads and shed antlers to add to his prized collections. He loved the early, brisk mornings of hunting and the calm still waters when fishing.
He was preceded in death by his Pawpaw: Carl Emory McKissack; Grandma: “Mac” Carmack Cothran; and nephew: Maxwell Daniel.
Cameron had a special place in his heart for his son: Bentley Eli McKissack; as well as: Kruz and Slade McKissack. Others left to cherish his memory are his parents; his loving companion: Ashley Brooke Seymore; sister: Crystal Krich; paternal grandparents: Reba “Mama” and Grady Moore; grandpa: William “Bill” Ray (Sheresa) Cothran.
A graveside service for Cameron W. McKissack was held at McKissack Family Farm on Thursday, April 7, 2022 at 11:00 a.m. with Terry Chapman officiating. Pallbearers included: Josh McMullin, Colin Calvert, Josh Cook, Justin Corp, Erik Tripp, and Ben Cook. Williams Funeral Home was in charge of all arrangements. Condolences may be offered by way of: www.williamsfh.com.